People who hold differing views, opinions, and facts often engage in some form of interaction – but this interaction can be framed in different ways. Perhaps one person thinks: “I’m fairly sure that my information is correct, but lets figure out the truth together” - that person might engage in a discussion with the lens “together we can converge upon the truth” (lens B). However, the way that the majority of differences begins is with the thought “I am certain of one thing – the other person is wrong” which leads to the lens “I need to convince them of my viewpoint” (lens A).

There then comes a fundamental tactical choice for lens A:

Obviously, this choice is not relevant for lens B, since you cannot reach mutual agreement through force (which coercion denotes). What’s particularly interesting is where the discourse option leads us. There are three options within discourse: conversation, debate and argument. 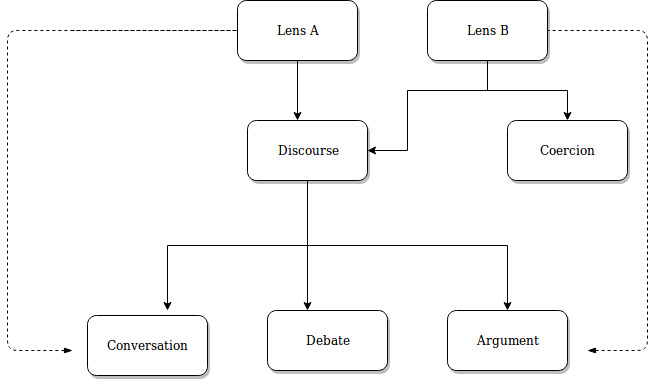 It is clear that the most peaceful form of engagement is conversation, where there is an attempt to get at the truth - what is important is the ideas they are presenting. What this requires is trust; the ideas are standing out there open and exposed with no emotional reinforcement or attachment to one’s sense of self. It is almost a paradox, the best way to change someone’s mind is when you are simply trying to get to the truth of the matter. Perhaps your ideas end up being incorrect and that would be okay – it’s not about being right.

Interactions should be conversations, not arguments.